Excitement at Grand Opening of New Exhibition: "Full Speed Ahead to the Fabulous SS United Stat

On June 14th, "Full Speed Ahead to the Fabulous SS United States!" opened at the National Lighthouse Museum in Staten Island, presented by the museum in partnership with the New York Chapter of the SS United States Conservancy! The exciting new exhibition will be on display through August 3rd, and was inaugurated with with a festive evening event and film screening. An event attendee shares her personal memorabilia at the grand opening of "Full Speed Ahead to the SS United St

On June 23rd, 1951, the SS United States was christened by Lucille Connally, wife of Texas senator Tom Connally, in Newport News, VA. Despite the 100-degree heat, thousands of attendees looked on as she christened the ship with a single swing of the champagne bottle at 12:45 p.m. Lucille Connally christens America's Flagship, the SS United States. Image by the Associated Press, courtesy of The New York Times online archives. An estimated 500,000 more watched what was said to 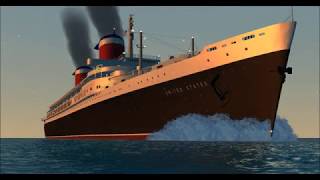 We love to see America's Flagship inspire! Young supporter Nick Van de Velde recently reached out to share this fantastic video, animated in the Virtual Sailor simulator. Watch, as the SS United States steams under the Verrazano-Narrows Bridge and into New York Harbor in Nick's creative video: "Virtual Sailor: The SS United States Needs Help" Like what you see? Be sure to visit the SS United States Conservancy's Facebook page and give us a 'like' — you can find exciting new c

The SS United States has always been a true American icon; she made a lasting impression on all who traveled aboard her, and to this day, many of the Big U's most enthusiastic supporters are former passengers and crew members eager to see the ship restored to her original glory. Former passenger Neil Roosevelt has an extra special connection to America's Flagship — his father, James Arthur Roosevelt, served aboard as an engineer during the vessel's prolific service career! Fo

On May 26th and 27th, Florida's Space Coast Symphony Orchestra ended its ninth season with “Suliman Plays Tchaikovsky,” an epic program featuring works from Fuchs, Tchaikovsky, and Shostakovich. Composer Kenneth Fuchs' "Atlantic Riband," which originally debuted at a 2012 concert in Newport News, VA, was inspired by the great ocean liners of the Twentieth Century — including the SS United States. After speaking before the performance about the history of the ship, its signifi