She's the largest luxury ocean liner "ever built in the United States using all American products and by American workers: Meet 'America's Flagship,' the SS United States." The SS United States has been a cultural touchstone since her maiden voyage in 1952. Today, she remains an international media sensation. Check out this piece by Fox News, highlighting the urgent need to save America's Flagship: The fastest ocean liner ever built, she carried more than 1.5 million passenge

You might not think that America's Flagship has much to do with the hit Netflix historical drama "The Crown," but think again! A recent article by the Washington Post takes a look at the show's second season, evaluating its realism in depicting a friendly relationship between Queen Elizabeth II and famous American evangelist Billy Graham. Breaking down the evidence, the SS United States plays a surprising role. Claire Foy, center, plays Queen Elizabeth II in “The Crown.” (Rob

The SS United States brought thousands of Americans to Europe for work and travel, many of them U.S. service members and their families. Captain James McPherson and his wife Lillie had already lived and worked in Japan and Brooklyn before the army posted the family to France in 1958. Booked by the military into first-class accommodations on the SS United States, they sailed from Manhattan with their two young daughters and a great-aunt who moved with them to help care for the

Your Crucial Role: Thank You for Supporting Our 2017 Appeal

The SS United States Conservancy would like to extend a heartfelt thank you to the many generous supporters who contributed to our 2017 Winter Appeal, helping to ensure that we can continue our vital work in the months ahead. Whether you renewed your Conservancy membership for another year, or made a donation for the very first time, we are so very grateful for your crucial backing. Your gift will be directly applied to the Conservancy’s many programs, including the vessel's 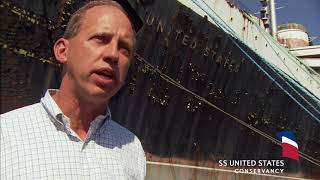 She was an instant star, appearing in the pages of Vogue and Playboy, attracting famed society bandleader Meyer Davis and his orchestras, and even stealing the show in the Walt Disney production Bon Voyage! Learn more about the SS United States' importance as a national cultural icon in this clip from the award-winning 2008 American Public Television documentary SS United States: Lady in Waiting. Presented with thanks to Mark Perry and the SS United States Conservancy West Co

On January 3rd, 1953, the SS United States arrived in Bremerhaven, Germany, for the first time. She was carrying 617 passengers, most of them American military personnel and their families. Heading the official greeting party were Samuel Reber, Acting US High Commissioner for Germany; Dr. Hans-Christoph Seebohm, Federal Minister of Transportation, and Wilhelm Kaisen, President of the Bremen Senate. The SS United States docked at Columbus Quay, Bremerhaven. Photograph courtesy