Today, we’re back to answer another important question posed by our generous supporters: Are the interiors on America's Flagship still intact? Interiors aboard the SS United States. Courtesy of Mark B. Perry. Unfortunately, the SS United States’ fittings were all dismantled in the 1980s and 1990s by previous owners, both for financial gain and to remove building materials popular in the 1950s that were later deemed hazardous. Many of the ship’s fittings and works of art do su

Joe Rota held the positions of First Class Elevator Operator, Bellboy, Waiter, and Photographer aboard the SS United States from 1955-1959 and 1964-1965. Here he recounts a surprising story from his time on the ship. Image courtesy of Joe Rota Joe recalls: "I was up in the radio room next to the bridge and there must have been a dozen officers milling around, which was very unusual, and they all had their binoculars and were pointing out the starboard window. I stepped out an

It's was extended by popular demand, but this weekend is your last chance to experience the glory of the WORLD'S FASTEST LUXURY LINER in New York at the City Reliquary! "The United States: Yesterday, Today, and Tomorrow" opened on July 1st at Brooklyn's City Reliquary with the help of the SS United States Conservancy's New York Chapter. The exhibition celebrates the extraordinary career of America’s Flagship, from her days as a young speed queen and popular cover girl to agin

The Conservancy is now offering these heavyweight sweatshirts, perfect for fall weather, featuring a new design by talented graphic artist Greg Shutters. CLICK HERE to order yours today! These stylish sweatshirts commemorate a dramatic voyage planned for the SS United States that sadly never took place; the ship was to depart on a 55-day "Grand Pacific Cruise" in 1970 and would have called on New Zealand, Australia, Japan and Hong Kong, among other ports-of-call. Alas, it was

The Big U is a cover girl once again

A 16-year old supporter from Ohio, Jacob Lee Parks, shares his drawing honoring this week's anniversary of September 11th. Jacob has been producing art on this powerful theme every year, and this year, he decided it should include his favorite ship. In a note to the Conservancy accompanying his drawing, he wrote, "I love what you guys do and I appreciate it every day." The SS United States has inspired Jacob to become a naval architect one day. He recently encountered a setba 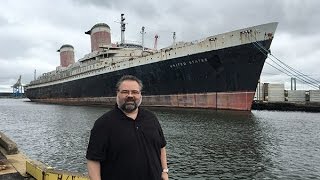 Barry Vaudrin of the popular cruise industry podcast takes you aboard America's Flagship. Video courtesy of Barry Vaudrin via YouTube Like what you see? Be sure to visit the SS United States Conservancy's Facebook page and give us a 'like'-- you can find new videos there every week! The WE ARE THE UNITED STATES campaign has raised over $300,000 to date-- want to help us reach our goal for rescuing rescue and revitalize America's Flagship? Visit our GoFundMe page and make your 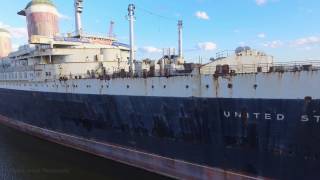 We are blown away by this incredible footage of the Big U in ultra-high resolution. Wow! Shot by photographer Ryan Smith, this drone footage captures the enduring majesty of our nation's sole remaining ocean liner. Video courtesy of YouTube user Ryan Smith (BSGT2TREKFAN88) Like what you see? Be sure to visit the SS United States Conservancy's Facebook page and give us a 'like' — you can find exciting new content there every week! America's Flagship has always been a soaring s

America's Flagship: A Golden Door to the New World

In April of 1953, the Freeman (Frydman) family sailed to America, the land of their dreams, on the SS United States. Elias and Regina Freeman survived the Nazi occupation of Poland from 1939 to 1945. In 1946, they moved to Sweden where their daughters Margareta and Sarah Elizabeth were born a few years later. For seven years, the Freemans waited for visas to the United States so they could rejoin their family in New York. Finally, in 1953, their visas came through and that Ap

In September of 1952, Shirley Perry boarded the SS United States as a First Class passenger en route to Vienna, Austria to begin her new job behind the Iron Curtain with the Central Intelligence Agency. While sailing across the Atlantic Ocean, Shirley enjoyed meeting fellow passengers and exploring the many decks of the Big U. During meals, she’d spot Rita Hayworth; she had to extricate one black sheep trunk from Ms. Hayworth’s luggage earlier on in the voyage. At the time, S
1
2